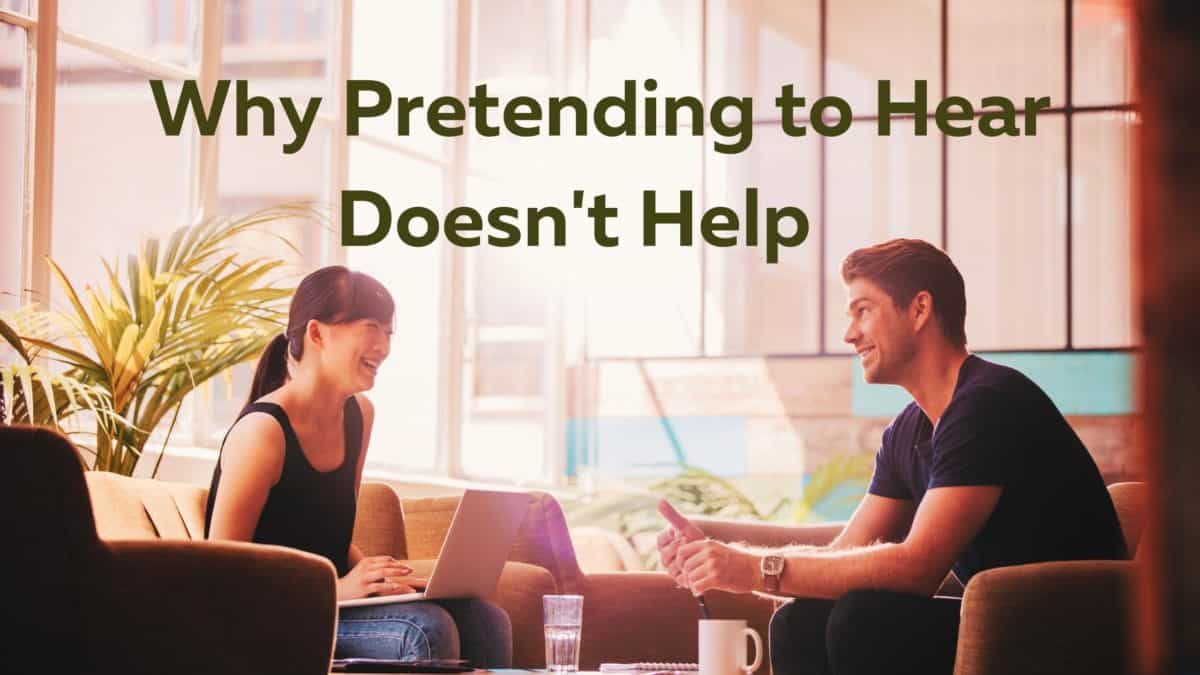 We’ve all done it. A smile and a nod in response to something said by the person we’re in conversation with, rather than saying ‘what?’ again or admitting we didn’t hear what they said. People with healthy hearing do this all the time, too!

And although that can be a successful strategy to minimize uncomfortable feelings in the moment, it’s a strategy that can backfire. Surely, that’s happened to you, too. When you smile and nod, hoping to squeak by, and instead your conversation partner looks at you in puzzlement. When pretending to hear backfires, it can be excruciatingly embarrassing.

Why do we pretend to hear in the first place?

So much of what we do in relation to socializing comes from really fundamental parts of our animal brain. We want to be accepted by our peers and into groups because we are essentially a species that feels safer within a pack. Think about it, in the wild and untamed world, it is inarguably safer to be protected by numbers. That part of the brain is less useful when you’re talking to Susan from Accounts, but it’s still active as you make decisions about how to react to other people in social situations.

Pretending to hear what someone is saying even when we can’t actually understand them can help conversation flow, or make the person we’re talking to feel more comfortable. We’re often thinking about the experience of those around us rather than ourselves when we tell these white lies.

Adjusting to a challenging hearing life

It can also be difficult to confront hearing loss and given the option, we might avoid addressing it at all. In that conversation with Susan, you might want to pretend to her and to yourself that your hearing isn’t an issue. If you can help yourself avoid hearing loss by not bringing attention to the problem, you’re more able to avoid confronting hearing loss head on.

But hearing loss inherently changes the way we communicate with others. Remember that connection with humans is programmed into our DNA as being essential to survival. Hearing loss can really challenge connection by making verbal conversation difficult, effortful and sometimes nearly impossible.

If that sounds familiar to you, take comfort that you aren’t alone. Most people who have chosen to intervene in hearing loss with hearing aids wait about ten years after the signs of hearing loss begin to appear. There are loads of reasons why that might happen, ranging from old-fashioned ideas around aging to concerns about the cost of hearing aids.

Hearing loss is all around us

Part of the efforts of advocacy and public health groups center on educating people about the prevalence of hearing loss. It can be easy to imagine that you’re going through the ordeal all on your own. And yet, more than 48 million Americans experience hearing loss. It’s estimated that almost 30 million people in the United States could benefit from hearing aids. Challenging hearing environments and people struggling to hear something being said are all around us.

It may seem like pretending to hear is the best path forward, but there can be consequences. The strategy may backfire if you’re found out and then you’re facing the awkwardness of reviving the conversation. Or, in workplace scenarios, you could be missing essential information that is necessary for you to complete tasks or projects.

While it might seem uncomfortable to consider, you might try to devise a strategy for the next instance you’re tempted to fake it till you make it. Instead of avoiding the challenging listening situation, you could address it head on.

If you’re in a noisy environment and struggling to keep up with a one-on-one situation, you might bring attention to how difficult it is to hear. You can choose to disclose hearing loss (if you have any) or not. A simple “Wow, it’s really loud in here. Can we shift over there where I think I’ll be able to hear you better?” is enough to draw attention to the problem and propose a solution.

A work situation might be trickier, but it’s still something you can plan for. If you’re sitting in a meeting and have trouble hearing a colleague’s speech, you might stop by their office later to ask for clarification on what they said. Or, if you’re working remotely, you can send an email asking to clarify the general points they made. You can directly address that the acoustics of the room made it difficult to hear what they were saying, or if you’d like, that you struggle to hear in certain listening environments.

Sometimes, it just takes one person to speak up about a problem until it’s revealed that many people are experiencing the same thing. So, in bringing attention to challenging listening environments or scenarios, we can often help out those around us, too.