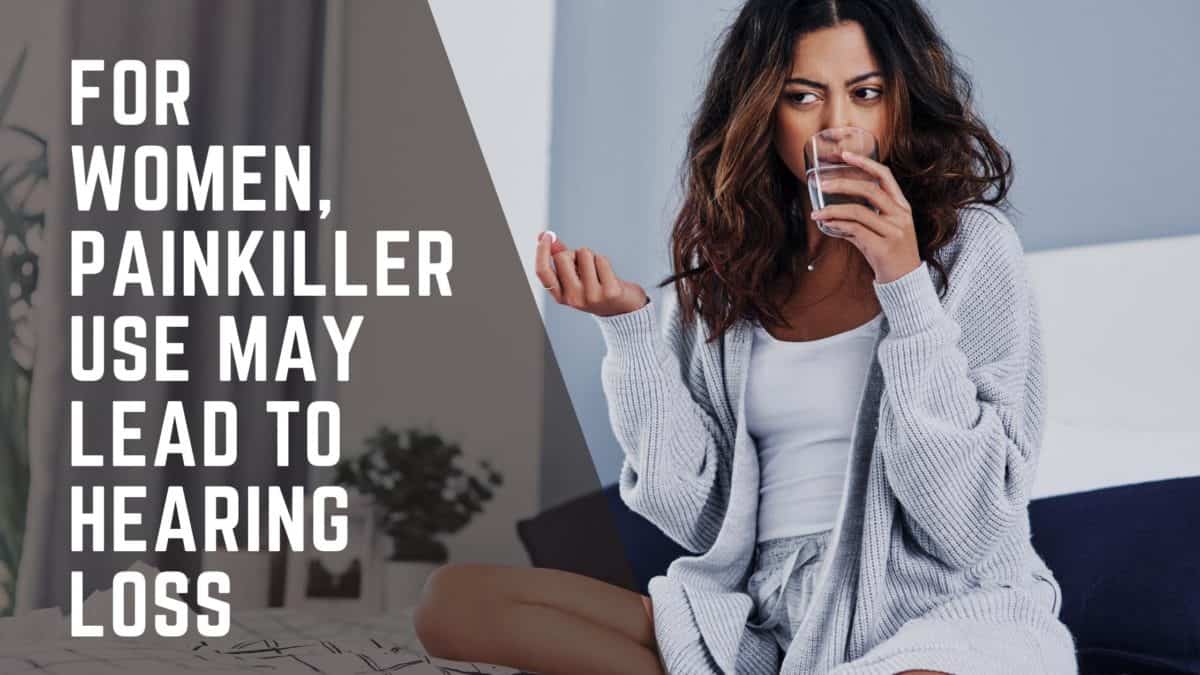 When you are feeling a slight headache or muscle ache, it’s normal to resort to taking an over-the-counter painkiller to reduce inflammation. While this is harmless if done every now and then if you resort to this regularly, then there are potential side effects and this includes your hearing.

A 2017 study suggests an unsuspected link between the long-term use of painkillers and hearing loss in women. The study found that just over 1 in 20 (5.5%) cases of hearing loss cases in their study potentially could be in part caused by regular use of paracetamol and ibuprofen. The study, funded by the US National Institutes of Health, was a collaboration between researchers from Harvard Medical School, the Massachusetts Eye, and Ear Infirmary, Vanderbilt University, Harvard TH Chan School of Public Health, and Brigham and Women’s Hospital.

Several different painkillers reduce pain. Some are prescribed due to their addictive qualities and used for extreme pain post-surgery or emergencies. Others are over the counter and can be taken at the patient’s discretion for discomfort or pain. However, if you have chronic pain, as is the case for instance with arthritis, it can be tempting to take these over-the-counter painkillers all too regularly.

Some of the most common types – paracetamol and ibuprofen were found to affect hearing. Paracetamol is found under many household names, the most notable being Tylenol, and reduces pain by blocking chemical messengers in the brain that signal to us that we are experiencing pain. In addition, paracetamol can reduce fever symptoms by affecting the chemical messengers of the brain which regulates body temperature.

Ibuprofen is commonly found as brand names such as names such as Advil and Motrin and works to reduce pain, fever, and swelling, by blocking the production of cyclooxygenase (COX)-1 and COX-2 which are released when the body experiences pain. It has been long studied that the use of these over-the-counter medicines could cause hearing loss if used in excess, but this recent study’s results showed the risk was higher than previously believed.

Exploring the Effects of Painkiller Use and Hearing Loss

The test group was collected from an ongoing Nurses’ Health Study which began in 1976 and included 121,700 women. They examined information collected from 55,850 women between the ages of 44-69 years old from this larger study. The participants were interviewed about their painkiller use biannually. The researchers interviewed the test group in 2012 about their hearing abilities 2012. The researchers accounted for cross-examination of other conditions which could affect hearing such as diabetes and the use of certain cancer medications which could be considered ototoxic (damaging to the ears) and eliminated these participants from the findings.

The researchers determined that there was a 9% higher chance of hearing loss in patients who took paracetamol for six years or more. Even more severe, they found that those who took ibuprofen twice a week for over six years had a 10% higher chance of hearing loss. They examined the use of aspirin and found fewer symptoms; however, they attribute this to a lower use than in the past of this drug. The research concluded that 4% of the cases of hearing loss reported by women in the study were the result of NSAID (non-steroidal anti-inflammatory drug) use, while 1.6% were the result of paracetamol use.

How do Painkillers Contribute to Hearing Loss?

There are several different types of hearing loss, however, the most common type is sensorineural. Sensorineural hearing loss occurs when tiny hair-like cells of the inner ear, which deliver sound to the brain are damaged. These cells rely on a rich and constant supply of oxygenated rich blood to stay healthy. Painkillers such as paracetamol and ibuprofen constrict blood vessels, ultimately limiting blood supply, and removing protection to the inner ear which your hearing relies on. When you use painkillers regularly you increase the damage to your ears as these chemicals are considered ototoxic.

If you take these drugs now and then there isn’t much need for worry, however, if you find that you are having chronic pain consult your physician. If you suspect that you do have hearing loss it is a good idea to have your hearing tested immediately. Contact us to set up a hearing exam today.

COVID-19 UPDATE: We are currently seeing patients by appointment only and observing all patient safety protocols.
CONTACT US
This is default text for notification bar
Learn more