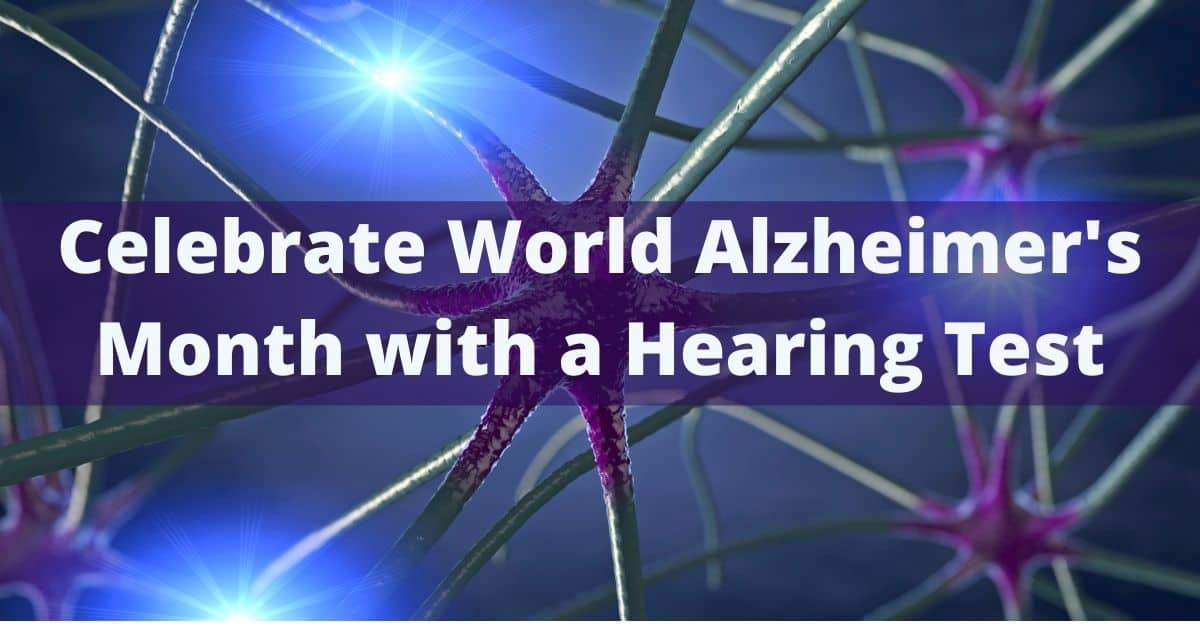 The Better Hearing Institute, a non-profit organization, recommends getting a healing test once every decade until age 50, and once every three years after that. If you’re due for one, World Alzheimer’s Month is a good time to make it a priority. Why is that?

The connection between untreated hearing loss and Alzheimer’s disease is well-established across multiple studies all around the world. While it’s not yet known exactly how the connection works, it’s statistically incontrovertible that there is one. The Lancet just published new research on Alzheimer’s disease suggesting that the link with hearing loss should be taken more seriously as a public health concern.

What Is Alzheimer’s Disease?

Alzheimer’s disease is a particular type of dementia that describes somewhere between 60-80% of cases. Symptoms include memory loss, disorientation, difficulty thinking, behavioral problems and mood disturbances. It’s striking how little is known about such a terrible disease, but we do know that it involves a buildup of plaque and protein “tangles” in the brain that interfere with neuronal transmission and, eventually, kill the brain cells.

When asked what can be done to prevent Alzheimer’s disease, researchers are not able to point to much at this time except a good diet and regular exercise. Of course, a lifestyle that incorporates healthy eating and physical activity is good for even more than staving off Alzheimer’s disease.

Recent research at Brigham and Women’s Hospital suggests that closely following an anti-inflammatory diet, such as the Alternate Mediterranean diet (AMED) or Dietary Approaches to Stop Hypertension (DASH), significantly reduces the likelihood of developing hearing loss, and significantly slows its progress. The theory is that inflammation restricts blood flow to the cilia (tiny, hair-like cells) that transduce (convert) the mechanical energy of sound to the electrical energy that is understood by the brain. Over time, that restricted blood flow means that the cilia don’t get enough nutrients and they die. The anti-inflammatory diet allows them to get what they need, and the implications are far-reaching throughout the body, possibly also affecting the problems inside the brain that lead to Alzheimer’s.

Statistically, hearing aids are shown to help reduce the risk for dementia – and Alzheimer’s disease is a form of dementia. Among the theories as to why is that they keep us socially active. Untreated hearing loss tends to lead to less social time. Our big human brains were evolved to exist in complex societies, and when we don’t spend enough time with others our brains aren’t doing what they were made for.

But if you can’t hear as well as you used to, it’s not much fun to be around people with whom you can’t communicate. Those with untreated hearing loss notice themselves getting fatigued a lot earlier than others, and the unfortunate pattern we see is that people who don’t treat their hearing loss simply start to pull away from social engagements. In addition to being an unhealthy condition in its own right—researchers say that loneliness is as physically damaging as smoking 15 cigarettes per day—social isolation is also a risk factor for Alzheimer’s disease.

If you’re due for a hearing test, don’t put it off any longer. We now know that untreated hearing loss can start a cascade of negative health effects, up to and including Alzheimer’s disease, and regular hearing checkups are the best way to keep your hearing health in good shape and continue to live life to the fullest!